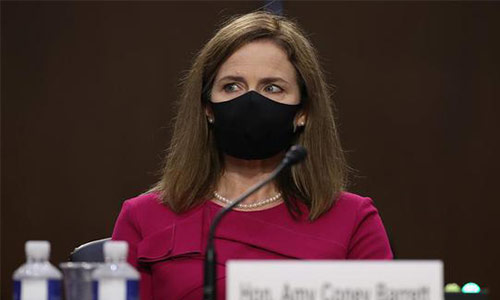 Amy Coney Barrett was confirmed by the US Senate on Monday night in a vote largely along party lines, giving President Donald Trump his third Supreme Court justice just a week before election day.

The conservative jurist’s appointment gives the court a 6-3 majority of Republican-appointed justices just in time to rule on election-related cases that could be pivotal to the outcome of the race.

Ms Barrett was confirmed by 52 votes to 48, with just one senator, a Republican, crossing the aisle. After the vote, she took one of two required oaths at an outdoor event at the White House with Justice Clarence Thomas.

Mr Trump used the televised swearing-in event to talk about the “radiant inheritance” of the US, telling the American public eight days before the November 3 election: “We must never lose confidence in our history, our heritage, or in our heroes.”

Ms Barrett will begin work on Tuesday after taking a second oath, administered in private by Chief Justice John Roberts.

Mr Trump has made clear his desire for Ms Barrett to be in place on the Supreme Court to rule on any disputes that arise during the election. The potential impact of her vote was evident last week when the court split 4-4 in a case regarding ballot deadlines in Pennsylvania, a critical swing state.

In that case, Mr Roberts broke with the conservative wing of the court to join the three liberals and deliver the deadlock. As a result, a three-day extension to Pennsylvania’s deadlines for mail-in ballots remained in place.

Ms Barrett’s views on election law are unclear, and her record as a federal appeals court judge does not include any election-related decisions. At her confirmation hearings this month Ms Barrett said she had not accepted the nomination to do Mr Trump’s bidding.

However, it is widely believed that she will act as a reliable conservative vote on the Supreme Court, and her confirmation is set to shift the court’s dynamics by sharply curtailing Mr Roberts’s ability to determine the outcome of close cases by joining with the liberal wing.

On Monday evening Ms Barrett reiterated that she would be independent of the president who nominated her and the Republican lawmakers who confirmed her at a rapid pace during a presidential campaign.

“The oath that I have solemnly taken tonight means, at its core, that I will do my job without any fear or favour, and that I will do so independently of both the political branches and of my own preferences,” she said at the White House.

The possible electoral consequences of Ms Barrett’s appointment were highlighted as, also on Monday evening, the Supreme Court issued another ruling on mail-ballot deadlines, this time splitting 5-3 to block an extension ordered by a federal judge in Wisconsin.

Mr Roberts this time joined his conservative colleagues to uphold an appeals court stay on the judge’s six-day extension. He explained that his vote was different in last week’s Pennsylvania case because that extension had been ordered by a state court, as opposed to the “federal intrusion on state lawmaking processes” in the Wisconsin matter.

Two of his conservative colleagues, Trump appointees Neil Gorsuch and Brett Kavanaugh, wrote they did not believe even state courts should change election processes determined by state legislatures.

Mr Kavanaugh conspicuously cited Bush vs Gore, the 2000 decision in which the court effectively handed the presidency to the Republican candidate, in his comments.

Some Democrats have argued that the party should add new Supreme Court seats in response to Ms Barrett’s confirmation. Joe Biden, the Democratic presidential candidate, has said he is “not a fan” of court packing but said last week he would set up a bipartisan panel to examine reforming the Supreme Court.

Democrats, who are in the minority in the Senate, lacked any real procedural tools to block Ms Barrett’s ascension to the court. Indeed, opinion polling has indicated that public support for her appointment grew, rather than shrank, during the confirmation process.

Every Democratic senator and Susan Collins, the Republican from Maine, voted against Ms Barrett. Lisa Murkowski, a Republican from Alaska, who had previously said she opposed confirming a justice so close to an election, voted for Ms Barrett.

Ms Barrett’s relatively smooth confirmation process has come despite the unprecedented nature of her installation so close to the presidential election, and an apparent outbreak of coronavirus tied to the White House event where her nomination was announced. Attendees at the swearing-in event on Monday night all wore masks and the seats were spaced apart from each other.

In 2016 Republicans had blocked Barack Obama from filling a vacant Supreme Court seat because it was an election year, arguing that voters should have a say.

Ms Barrett fills the vacant seat left by the death last month of Ruth Bader Ginsburg, replacing a stalwart liberal with a conservative cheered by anti-abortion activists as the justice who might finally herald the end of Roe vs Wade, the 1973 ruling that recognised a constitutional right to abortion.

In addition to abortion rights, Ms Barrett’s appointment is expected to swing the Supreme Court further to the right on issues such as gun control and the government’s regulatory powers.

One of the most high-profile cases she will hear in the near term is a challenge to the Affordable Care Act, Mr Obama’s signature healthcare law. Arguments in that case are scheduled for November 10.