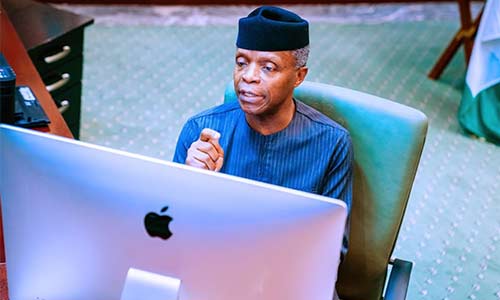 Vice President Yemi Osinbajo says there is need for purpose-built virtual-proceedings software that takes into account the various needs of trials and other court proceedings.

Osinbajo’s spokesman, Laolu Akande, in a statement on Thursday in Abuja, said the vice president made the submission in his keynote at the Virtual Law Pavilion Technology Conference.

The Chief Justice of Nigeria, Justice Tanko Muhammed, the President of the Nigerian Bar Association, Paul Usoro, among others also addressed the the 2020 Legal Tech Conference with the theme “A New Paradigm in Justice Delivery”.

According to Osinbajo, the advance of technology is fast-tracking the democratisation of law and justice in Nigeria.

“Today, even judges, especially older ones, will of course prefer virtual processes to in-person proceedings; technology and the fourth industrial revolution, are no longer luxuries but they are the inevitable substructure of our new way of life.

“For the administration of justice system, change has surely come and I am personally excited to see how easily our entire judicial system is willingly adapting to innovation.

“Tech companies must now innovate even more; we must now have purpose-built virtual-proceedings software that takes into account the various needs of trials and other court proceedings.

“There will be opportunities for retraining of judicial personnel, lawyers, and paralegal staff, the new normal calls for new skills and new ways of doing old things and doing away with many old habits,” he said.

The vice president said there was need for the entirety of Nigeria’s justice sector to embrace the new way of doing things as the disruptions caused by the COVID-19 pandemic had necessitated the adoption of technology for all court processes.

Osinbajo said that the Chief Justice of Nigeria had already set the example of adaptation to the new paradigm.

He urged lawyers and stakeholders in the justice sector to be prepared for the times ahead by finding alternative and better ways of delivering legal and associated services.

“The next few years will see even more changes; artificial Intelligence (AI) will play a bigger role in our court systems.

“ I am told that Law Pavilion is already pioneering an AI-Powered-Speech-to-Text- Transcription System to replace writing in long hand and even the traditional slow stenographic recording.

“There is also the AI-Powered Document Review System that helps judges quickly extract authorities and laws cited in any legal documents, outlines and analyses the principles relied upon automatically, in seconds.

“This is aside from the comprehensive court proceedings software that they have now perfected,” he said.

He restated the commitment of the President Muhammadu Buhari administration to support technology companies to drive the gradual shift of systems, in the country, to the ‘new normal’.

In his contribution, Muhammed said that the judiciary, which played a crucial role in the economic development of Nigeria, must embrace changes within the environment so that it would continue to remain relevant in the scheme of things.

The Legal Tech Conference is organised by the Law Pavilion in partnership with TELNET Nigeria Ltd.

Others are Ekiti State Attorney General and Justice Commissioner, Olawale Fapohunda; and Mr Dapo Akinosun, Partner, SimmonsCooper, among others