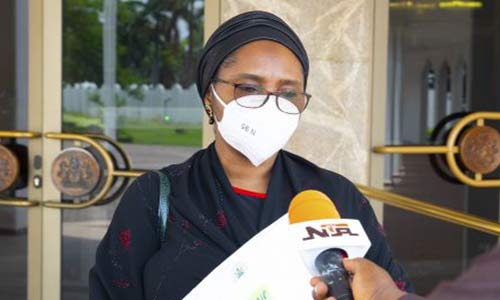 The Federal Government on Thursday said the oil revenue target earlier put at N940.91 billion has fallen to N125 billion in the first quarter of 2020.

It attributed this to the raving impact of COVID-19 pandemic.

The Minister of Finance, Mrs Zainab Ahmed, made this disclosure while briefing reporters at the end of the National Economic Council (NEC).

The virtual meeting was chaired by Vice President Yemi Osinbajo from the Presidential Villa, Abuja.

According to her, the fall represented 31 per cent of the prorated oil revenue target.

Ahmed said with Nigeria’s poverty rate at 40 per cent, the drastic fall in oil revenue would only exacerbate Nigeria’s state of squalor, pointing out that the country’s economic situation will be worsened with the gross domestic product (GDP) growth expected to contract by -8.94 per cent this year.

She, however, said if the measures being put in place to ameliorate the state of the economy works as planned, the contraction might only be by -4.4 per cent without fiscal stimulus.

Mrs Ahmed also explained that with effective fiscal stimulus in place during this pandemic, the situation might bring the contraction down to as low as 0.5 per cent.

The minister added that with the activities of different presidential committees set up by the president to evolve measures aimed at cushioning the effects of the pandemic on the economy, the Federal Government had resolved to support the economies of states by suspending various deductions of debts they owe the federal government.

‘On the economy, COVID-19 has resulted in the collapse in oil prices. This will impact negatively, and the impact has already started showing on the federation’s revenues and on the foreign exchange earnings. Net oil and gas revenue and influx to the federation account in the first quarter of 2020 amounted to N940.91 billion,’ the minister stated.

‘This represented a shortfall of N125. 52 billion or 31 per cent of the prorated amount that is supposed to have been realised by the end of that first quarter. Forty per cent of the population in Nigeria today are classified as poor. The crisis will only multiply this misery.

‘The economic growth in Nigeria, that is the GDP, could in the worst-case scenario, contract by as much as –8.94% in 2020. But in the best case, which is the case we are working on, it could be a contraction of –4.4 per cent if there is no fiscal stimulus. But with the fiscal stimulus plan that we are working on, this contraction can be mitigated and we might end up with a negative –0.59%.

‘The Federal Government is committed to supporting the financial viability of states, including the suspension of payments in respect of commitments, debts that have been secured with ISPOs by the states at the federal levels. So, we have already implemented suspension of deductions of a number of loans that have been taken by the states from April and also in May,’ she explained.

Mrs Ahmed said some of the measures proposed to stimulate the economy by the Federal Government so far include the approval of N500 billion to support healthcare facilities as well as the proposed relief to taxpayers and incentives meant to encourage employers to retain and recruit staff during the lockdown period.

The minister disclosed that the World Bank country director in Nigeria, who was invited to the meeting, told the council about the bank’s assessment of Nigeria’s economy, submitting that the pandemic would imminently plunge the country into recession.

Against this background, she said the Bretton Woods institution’s representative told the council that it had proposed to offer Nigeria some relief package including a budget support policy backed by $1.5 billion fiscal support to states to be disbursed at the end of September.

Ahmed said with the development, the 36 states of the federation are expected to get between the average of N150 billion to N200 billion in September.

‘We also had discussions with the World Bank. The World Bank Country Director was invited into the meeting and he spoke to the meeting in respect of their assessment of the impact of COVID-19 on the economy and also their review of the measures that government has taken.

‘This package also includes the increase in the social register by one million households to 3.5 million for cash transfer programmes and palliatives and other social safety net programmes.

‘The World Bank maintains that the impact of the COVID-19 on Nigeria will lead to severe amplified human and economic cost, which will move the country into a recession. The World Bank planned a proposed package for immediate fiscal relief for the Federal Government.

‘This will also involve policy-based budget support for the Federal Government, focusing on measures to maintain macro-financial stability and create fiscal space for the proposed stimulus. The World Bank package has also got a proposal of $1.5 billion for the states and this package will be dedicated to the states. And it will be a programme for results which the states are already used to implementing.

‘We are looking at an average of between N150 billion to N200 billion based on the plan to the 36 states. These are states that have already made some particular commitments and achievements so that they will be able to get immediate disbursements of parts of these funds.’

Ahmed who noted that cases of COVID-19 infection have continued to rise in the country unabated, saying that with over 6,000 cases already recorded by the Nigeria Centre for Disease Control (NCDC), the situation is expected to grow worse to the tune of 300,000 by August.

She also gave the balances in the federation accounts as at May 21, 2020, as $72.04 million in the Excess Crude Account (ECA), N39.337 billion in Stabilization Account and N125.19 billion In the Natural Resource Development Fund Account.

Meanwhile, the governors of the 36 states are pushing for the full reopening of the Nigerian economy, agreeing to work with the Presidential Task Force on COVID-19 to achieve it soon.

The governors resolved to set up an NEC committee to sit with the PTF and work out the modalities for reopening the economy.

‘On COVID-19, Council set up an NEC committee to work with PTF to work out the modalities for the reopening of the national economy.