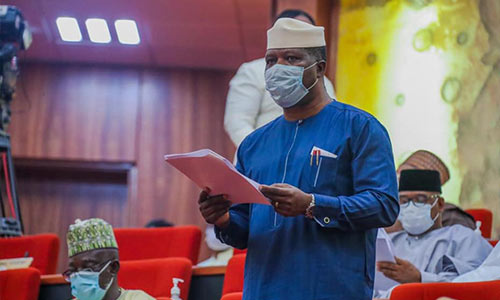 The Nigerian Senate confirmed the appointment of eight Justices of the Supreme Court at Tuesday’s plenary after a satisfactory report by its Committee.

The Justices who were confirmed are:

The Chairman of the Senate Committee on Judiciary, Human Rights and Legal Matters, Senator Opeyemi Bamidele, presented the report of his panel’s screening exercise for senators’ consideration on Tuesday.

He said his committee found that all the judges are eminently qualified for the exalted positions and that there was no petition against any of them.

Contributing to the debate after the report was presented by the Chairman, Senator Michael Opeyemi Bamidele, Senator James Ebiowo Manager expressed satisfaction for a thorough report.

“From all indications, the Committee has done a very good work and as you all know, appointment of Justices of the Court of Appeal is a process and particularly that the relevant sections of the law were cited.

“I commend President Muhammadu Buhari for appointing the 8 Justices at a single stretch.

“I also want to commend the Committee for doing a thorough job having known the complexities involved.”

In his contribution before lending support for confirmation, Senate Deputy President, Ovie Omo-Agege explained that there was no petition from the members of the public to the Committee against any of the nominees, saying that the situation made them honorable for confirmation.

“I applaud the Justices nominees because there was no petition sent to the Committee opposing their nomination as a result of electoral matters while at the Court of Appeal seat.

Senator Gabriel Suswam who is a member of the Committee confirmed to the Senate that the nominees were thoroughly screened, stressing that they should be confirmed without hesitation.

“As a member of the Committee, I rise to support the report that they should be confirmed.

“Mr. President, we screened them and I want to say that these are men of honour and I ask that this Senate do approve their nomination without any hesitation. ”

After they were confirmed by the Committee of the whole, Senate President, Dr Ahmad Ibrahim Lawan urged the Federal Government to make funds available to the judiciary to enable them discharge their duties.