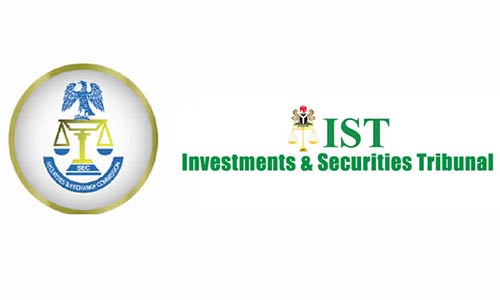 In the face of the Covid-19 pandemic, the Investment and Securities Tribunal (IST) disclosed, Thursday that it has entered judgments in two out of 17 pending cases at the tribunal, and adopted remote hearings to enable it decongest the case docket for the good of the capital market.

The former acting Chairman of IST, Mr. Jude Idunni, made the revelation in Abuja during the handover ceremony to the new Chairman, Mr. Amos Isaac Azi.

The IST, he stated, has undoubtedly become a very critical infrastructure in the nation’s capital market and has continued to receive commendations globally as well as being recommended to other emerging markets as the template for capital market dispute resolution.

According to Idunni, the IST, which has become a child of necessity for the capital market has over the years been able to establish a unique jurisprudence for the market, and through its well-reasoned judgments helped to build and maintain investor confidence, by entrenching some measure of certainty and predictability in dispute resolution in the Nigerian capital market, which is the very essence for the confidence.

Idunni, who was appointed acting chairman of the IST on September 26, 2019, expressed gratitude to President Muhammadu Buhari and the Minister of Finance, Budget and National Planning, Mrs. Zainab Ahmed, for the opportunity of being saddled with the responsibility of managing the affairs of the Tribunal in the past 10 months, adding that it was “a responsibility that came at a time when the Tribunal was embroiled in an unending labour restiveness, with its attendant negative publicity for the Tribunal and its consequence for investors’ confidence”.

He said: “With the cooperation of the staff, members and the labour union, we have been privileged to experience a very long period of industrial harmony, which we have leveraged upon to make some meaningful traction in carrying out our statutory mandate of adjudication amidst other responsibilities that have served to steer the affairs of the Tribunal on the right part.

“When on September 26, 2019, the responsibility of managing the affairs of this Tribunal rested on my shoulders, I was never deluded that it was going to be a walk in the park, however we remained undaunted and set out to surmount the challenge. Our scorecard which has been carefully articulated in my handover note which will be availed the Honourable Chairman shortly speaks for itself.”

Admonishing the new IST Chairman, he said: “To succeed in your onerous assignment, you require the twin virtues of patience and humility. You will be called upon to continuously make sacrifices for and on behalf of the Tribunal. It is my prayer that God will grant you the wisdom of Solomon to navigate the ship of IST.”

In his remarks, Amos Azi, who was until his current appointment a director with the Securities and Exchange Commission (SEC), noted that the IST is historically the first of its kind in Africa and the third globally.

Noting that the capital market plays a critical role in any economy, he pointed out that a tribunal of IST nature is a catalyst for investment, adding that resolving disputes in a timely and efficient manner is cardinal to attracting investments.

He also stated that while dispute resolution is key to investment, the capital market remains a pivot for government’s quest to diversify the economy.

Azi promised to adopt the spirit of teamwork, synergize with the staff and management not only to take the IST to the next level but to better the investment climate in the country.