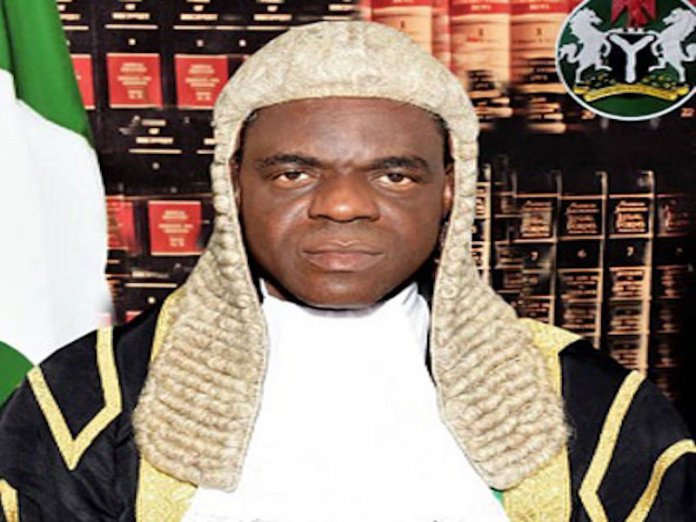 Davidson Iriekpen in Lagos and Chuks Okocha in Abuja

The Chief Judge of the Federal High Court (FHC), Justice John Tsoho, has “strongly advised” all judges in the courts to desist from granting ex-parte orders in political matters.

Justice Tsoho also advised the judges not to entertain matters whose substance arose from outside their judicial divisions.

The admonition came just as the Independent National Electoral Commission (INEC) yesterday expressed concerns about conflicting orders from courts of coordinate jurisdiction and urged the Nigerian Bar Association (NBA) to halt the trend.

The CJ in a June 24 circular titled: “Grant of Ex-parte Orders” and Hearing of Cases from Outside Immediate Territorial Jurisdiction,” referred the judges to another circular dated August 6, 2018 issued by his predecessor, Justice Abdul Kafarati, which, according to him, still applies.

Tsoho warned the judges to beware of “political manoeuvring” which was on the rise as a prelude to party conventions, primaries and elections in some states.

It called on the Nigerian Bar Association (NBA) to halt the trend by championing such an abuse of the judicial process.

In a statement yesterday by the National Commissioner in charge of Voter Education and Public Information, Mr. Festus Okoye, the commission called on the NBA to remind its members on the need to put national interest above all other issues.

“We urge the Nigerian Bar Association (NBA) to impress on senior members of the Bar to put the country’s interest and the judiciary above every other interest and not allow personal considerations to outweigh their commitment to the profession, the rule of law and due process. It is in the best interest of the Bar and the Bench not to do anything that would bring them into disrepute,” it added.

The commission said it was worried about the spate and rapidity of conflicting court orders mostly obtained ex-parte, involving substantially the same parties, on the same or similar grounds and from courts of coordinate jurisdiction on issues and challenges around the administration of political parties and conduct of party primaries.

It said some of the orders were obtained from courts completely removed from the geographical area where the course of action arose.
According to INEC, though the commission is committed to obeying all court orders, the speed, frequency and conflicting nature of the orders leave it in an awkward and impossible position.

INEC said these calls had become necessary to draw attention to the uncertainties and threats posed by conflicting orders on not only preparations for elections, but also to the growth and development of democracy.

INEC explained that it had kept its promise to upload the Code of Conduct and Rules of Engagement for Security Personnel on Electoral Duty on the websites of the commission, that of the Office of the National Security Adviser and the Nigeria Police Force by yesterday.
In view of the pending Edo and Ondo governorship elections and the commission’s policy on conducting elections in the context of the COVID-19 pandemic, the commission said it would use the vacant seat in the Nasarawa State of House Assembly as a trial to perfect the conduct of elections in post-COVID-19 era

According to INEC, it will test run its policy in the Nasarawa Central State Constituency of Nasarawa State to fill the vacancy created by the death of Hon. Adamu Suleiman Ibrahim, thr member who represented the constituency.

It said the bye-election would take place on August 8, 2020, adding that the timetable and schedule of activities have been uploaded on the commission’s website.

It added that the official notification for the election will be given on June 29 and political parties shall conduct their primaries between June 30 and July 6, while the last day for submission of list of nominated candidates is July 7.

Also, INEC stated that the scheduling of this election would enable the commission and all critical stakeholders to learn the necessary lessons and make adjustments before the governorship elections in Edo and Ondo States.